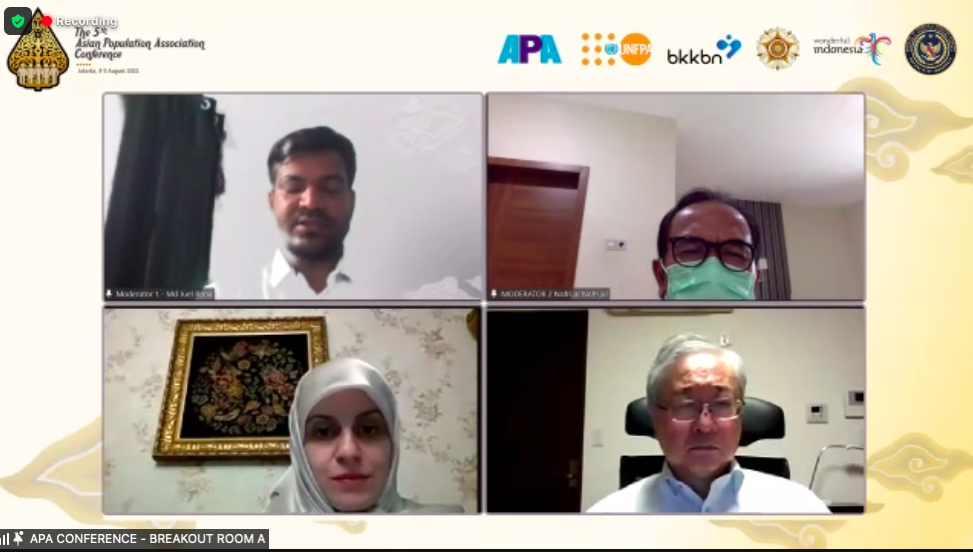 CPPS UGM – The 5th Asian Population Association (APA) Conference of the year has been held virtually on 3-5 August 2021 in Indonesia by collaborating with BKKBN, UNFPA, and CPPS UGM. Union Formation is one of the interesting topics discussed in the parallel class on the second day, August 4, 2021. More than 80 participants joint this session with three speakers, i.e., Yothin Sawangde, Ph.D (an Associate Professor at the Institute for Population and Social Research, Mahidol University, Thailand), Fatemeh Torabi Ph.D (Research Officer and Data Analyst at Swansea University, Iran), and Prof. Hiroshi Kojima (Professor of Social Sciences at Waseda University, Japan).

The Role of Family in Children’s IQ Development

“The joy felt by children can affect the development of their IQ” is the highlight of a study entitled “Family Context, Sufficient Physical Activity, and Game Consequences on Primary School Age Children’s Jovial Habit and IQ in Thailand” conducted by Yothun Sawagde. This study targets 2,306 respondents who are the youngest children in the family, usually the second or third child. Using the Path Analysis method, the results of this study indicate that parental support, both in the nuclear family and extended family, has an influence on children’s jovial behavior and has an impact on children’s IQ scores.

“Besides father and mother in a nuclear family, the extended family such as grandparents, apparently also plays an important role in increasing or decreasing children’s jovial behavior which then has a great impact on their IQ scores,” Sawangde said.

Therefore, according to him, environment and circumstances are the most important things in shaping children’s psychological condition and intelligence.

Marital Preference in Iran and Japan

Another speaker, Prof. Hiroshi Kojima, delivered his finding on the premarital cohabitation experience of married couples in Japan. He explained that the results of his study entitled “Correlation of Premarital Cohabitation Experience of Married Adults in Japan” showed that there were differences in gender-based cohabitation strategies.

Women with higher education usually postpone their marriage to advance a professional career while keeping their relationship and seeking equal relationship.

On the same occasion, Fatemeh Torabi through er study entitled “Temporal Changes in Ideal Age at Marriage in Iran” explained that there was an increase in the ideal age of marriage, both for men and women in Iran, even though the ideal marriage age coefficient for women was higher than that of men. “There are different variables that encourage the ideal age for marriage for women, that is the important variable of marital status in 2004 and the religious variable in 2015,” she explained.