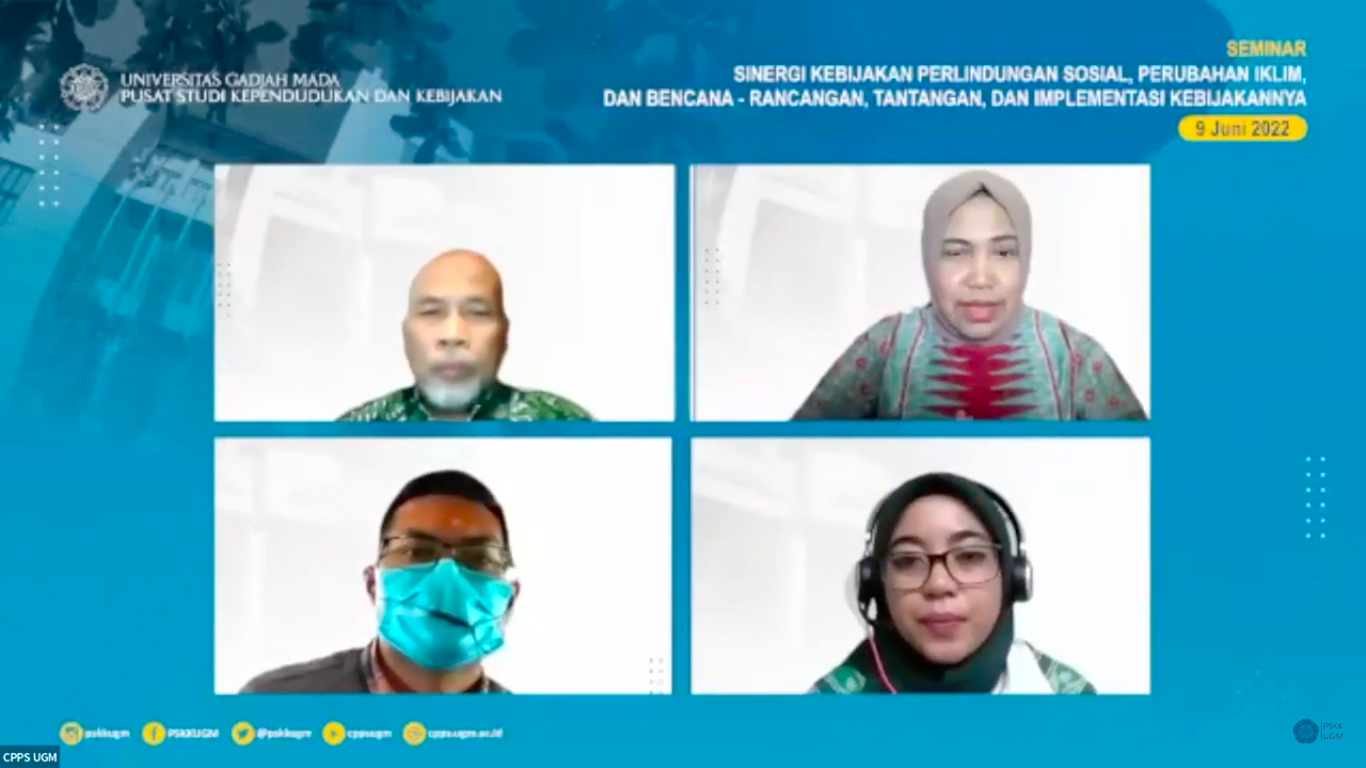 The government has developed a new approach for solving the socio-economic problems caused by climate change and disasters by using a social protection scheme called the Adaptive Social Protection (PSA) policy.

To support the government in developing the PSA policy in Indonesia, the Center for Population and Policy Studies (CPPS) Universitas Gadjah Mada (UGM) held a workshop on Thursday, 9 June 2022.

The workshop was run under the theme, “The Synergy among Social Protection, Climate Change, and Disaster Policies – Policy Design, Challenges, and Its Implementation” by inviting some experts in PSA policy.

The CPPS UGM held the workshop to facilitate a meeting among academics, policymakers, and international institutions to formulate accurate strategies to realize the PSA policy in Indonesia.

Climate Change and the Importance of Strengthening PSA Policy in Indonesia

In 2018 and 2019, the government initiated the distribution of PSA by providing social assistance for the Family Hope Program (PKH) to poor households affected by the eruption of Mount Sinabung, North Sumatra, and the earthquake in South Halmahera, North Maluku.

The idea of ​​developing the PSA policy is considered relevant for the Indonesians since some regions are highly vulnerable to climate change and natural disasters.

The PSA policy in Indonesia is currently focused more on solving the socio-economic problems caused by disasters and has not responded to climate change issues, such as responses to environmental conservation.

The policy is different from that of some countries, such as Africa, South Asia, and Latin America, some of which have been implemented since the early 2000s.

Governments in those countries have used the PSA policy not only to respond to socio-economic problems caused by natural disasters but also to address climate change issues, including forest conservation.

The PSA policy implemented in Brazil, for instance, is one of the most comprehensive PSA policies. They have implemented it to reduce the socio-economic risk for the victims of natural disasters. At the same time, Brazil has also developed a type of PSA policy that specifically minimizes deforestation and supports nature conservation.

The Indonesian government has officially declared the implementation of the PSA policy in the 2020-2024 National Medium-Term Development Plan (RPJMN) document.

The government stated their plan to develop the PSA system through the development of an institutional system and a PSA policy financing system.

One of the important targets to be achieved by 2024 is that 30 percent of the central government agencies and local governments have adopted the PSA policy system. 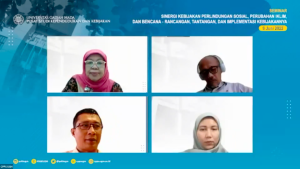 Unifying Mission to Form the Ideal PSA Policy in Indonesia

One of the speakers, Dinar D. Kharisma, Ph.D., from the Directorate of Poverty Reduction and Community Empowerment, Bappenas, said that there are at least five steps needed to strengthen PSA in Indonesia, namely the preparation of regulations and ASP development agendas, ownership development coordination among stakeholders, risk and vulnerability analysis based on valid data and risk mapping, the adaptation of social protection programs according to risk and vulnerability and the development of sustainable financing for program implementation.

Mulyadi Sumarto, PhD., the CPPS UGM researcher, also conveyed the concept of PSA and how the PSA program has been implemented in several countries, such as Africa, Brazil, and the Philippines.

He also explained the concept of PSA and the development of PSA policies in Indonesia. He added that once we study in the Philippines, for instance, the PSA policy has been implemented since the mid-1990s.

“If we (the Indonesians) are just starting this policy by this year, you can estimate this. If this is compared to that of the Philippines, we are not what so-called “left behind”, yeah you know it right? The appropriate term is that there is a gap of more than 25 years,” he added.

Moreover, there is no legal regulation currently in Indonesia regarding PSA, but its implementation refers to the RPJMN, and several PSA practices have also been implemented. “This is unique,” he continued.

You can get to know more about this workshop on the YouTube channel “CPPS UGM” or hit the link below: