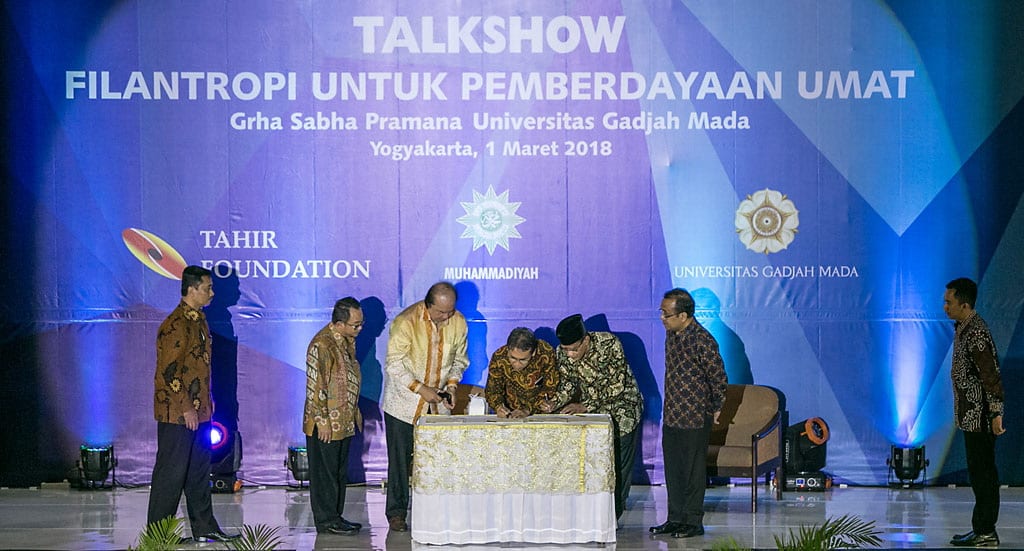 Jakarta – Majalahcsr. The philanthropic potential is enormous for directing Corporate Social Responsibility (CSR) to become something longer by working with others in an area.

If only philanthropy is conducted in the form of giving money or goods to people who are deemed in need, the activity will not have a significant impact on the alleviation of the people from poverty. Conversely, if it is packaged in an empowerment activity, philanthropic activities are very likely to improve the economy of the targeted citizens.

“The philanthropic activity should not only be a charity, but also an empowerment,” said Muhammadiyah Abdul Mu’ti, General Secretary of Muhammadiyah Central Leadership (PP) in a discussion on “Philanthropy for People Empowerment” at Universitas Gadjah Mada, Sleman Regency, Special Region of Yogyakarta, as reported by Kompas, Thursday (1/3).

The event which was held on the cooperation between UGM, Muhammadiyah and Tahir Foundation was attended by speakers, namely Secretary of State, Pratikno; businessman, Dato’Sri Tahir, and Rector of UGM, Panut Mulyono. The event hosted by television journalist, Najwa Shihab, was also attended by the General Chairman of PP Muhammadiyah, Haedar Nashir.

Pratikno stated, non-governmental agencies, including the perpetrators of philanthropy, had an important role to participate in solving various problems that occur in the society. He said that government energy was limited, so philanthropy became something important.

If it was based on a strong personal commitment, Tahir said, philanthropic activities could be sustainably done. He claimed that the philanthropy he had been working on did not depend on whether it was a profit or loss this year.

Co-chair of Indonesian Philanthropy, Erna Witoelar explained that philanthropy was not just a grant, because it was at the moment leading to blended investments. “For example Medco in Papua operates a combination of grants and investment products,” said Erna, Wednesday (7/3). Another example was Unilever Foundation through their CSR program built companies to manage waste. Adaro Foundation, which used to provide latrines, then made a company to produce latrines sold in the surrounding area.

“Usually this happens when a foundation has philanthropy and CSR activities,” explained Erna.

At the moment Erna acknowledged that as time went by, the second generation of foundations such as Tanoto Foundation or Tahir Foundation had changed a lot for blended investment, or sustainable philanthropy.

With that commitment, Tahir Foundation decided to work together with Muhammadiyah and UGM to empower the community. In cooperation which started this year, Tahir Foundation would distribute philanthropy funds of Rp 250 billion for five years or Rp 50 billion per year. The funds will be used for empowerment in the areas of health, education and employment creation.

Senior Researcher of Center for Population and Policy Studies UGM Muhadjir Darwin said, in this cooperation Tahir Foundation was as a provider of funds, while Muhammadiyah and UGM were as framework arranger and implementer of community empowerment program. The program would target communities in a number of areas with different geographical conditions, such as fishermen, urban poor, or people still living in remote areas.

“This program will have to be innovative in order to create sustainable productive activities in the community,” said Muhadjir who was directly involved in the cooperation.

Haedar Nasir said that Muhammadiyah was ready to cooperate with Tahir Foundation and UGM to develop a truly effective community empowerment. With the experiences of the three institutions, the cooperation was expected to produce a broad-based empowerment program and to provide a significant impact.

Panut added, the empowerment program would involve students, both from UGM and Muhammadiyah universities. Not only was the involvement of the students as the executor, but also as the researcher who made this empowerment program as the study material for the final assignment. []