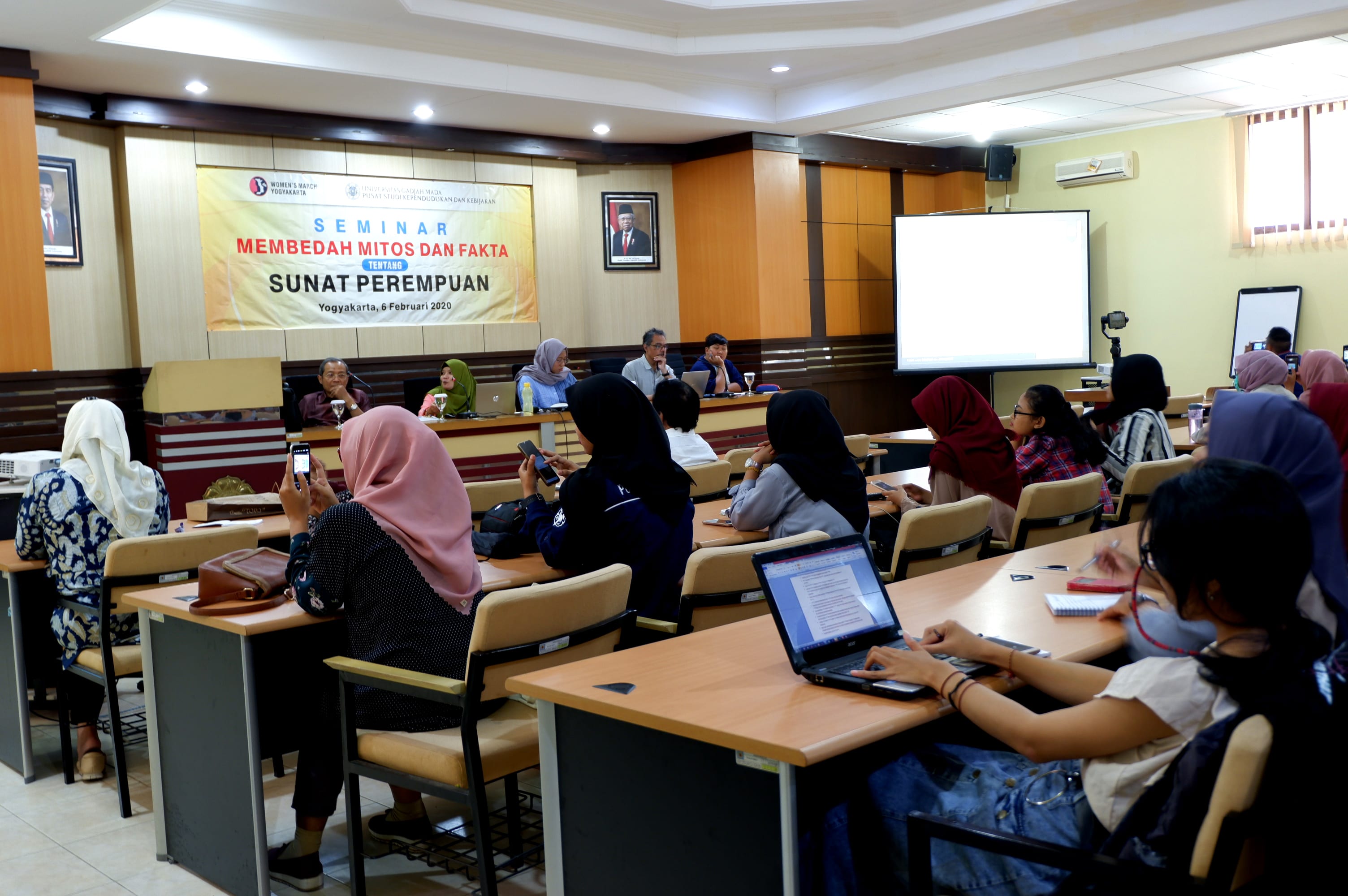 Yogyakarta, CPPS UGM – A religious foundation in Bandung routinely holds annual mass female genital mutilation/cutting (FGM/C). At the latest FGM/C, the foundation targets the number of girls to participate by 130. However, the number of participants who registered reached 220, as reported by Vice Indonesia (01/10/2020).

Indonesia, which has been spared the FGM/C “radar monitoring” at the global level, is now emerging with this problem. In addition, the practice of FGM/C is considered as an African phenomenon, a phenomenon that only occurs in Africa. Data from Riskesdas 2013 underlines the presence of another view that FGM/C also occurs in Asia, especially Indonesia.

This seminar did not only present the researchers of CPPS UGM, but it also invited gender activists, reproductive health activists, and Islamic scholars. This seminar aims to see FGM/C from perspectives, such as culture, religion, and policy.

The researcher of CPPS UGM, Sri Purwatiningsih, S.Sc., M.Kes., as the seminar speaker said that in some regions, the practice of circumcision or FGM/C in Indonesia is considered a religious obligation that must be fulfilled and has become a hereditary tradition that is hard to eradicate. The statement refers to the results of CPPS UGM survey 2017 entitled Female Genital Mutilation/Cutting: Intersection between Tradition and Modernity.

The results of the UGM CPPS survey show that the majority of FGM/C is performed by dukun (45 percent), midwives/nurses/health workers (38%), FGM/C dukun (10%), and doctors (1%). CPPS survey results also show that 84.6% of dukun performed the FGM/C using a knife or razor blade; 3.9% using scissors; and 7.7% using needles.

Based on WHO typology (2012), there are four methods used in FGM/C; clitoridectomy (cutting part or all of the clitoris or membrane above it), excision (cutting part or all of the clitoris and/or labia minora with or without cutting the labia majora), infibulation (the practice of narrowing the vaginal opening with the lining by cutting or changing the shape of the labia majora and labia minora, while the clitoris is not cut at all), and other methods of action that injure the vagina without medical purposes, such as scratching, piercing or scratching the genital area.

Meanwhile, according to the results of the FGM/C survey 2017 conducted by CPPS UGM, the fourth type is the most widely used method in Indonesia. In addition to these findings, the study also found types of FGM/C practices that are not included in WHO typology, such as partially cutting the clitoris and prepuce, scratching or scraping the urethral opening, and symbolic without injury.

The survey of CPPS UGM 2017 was conducted in ten provinces; seven provinces have a fairly high FGM/C prevalence rate, such as Gorontalo, Bangka Belitung, Banten, Riau, South Kalimantan, West Java, and West Sulawesi; and three provinces have local regulations that support the practice of medicalizing women in health service facilities, such as East Kalimantan, Jambi, and West Nusa Tenggara.

No Health Benefits, Only Harm

Referring to WHO data, FGM/C has no health benefits, it endangers girls and women in many ways, such as excessive bleeding, genital tissue swelling, fever, infections such as tetanus, bladder problems, and injuries to the surrounding genital tissue to death.

Due to the strong background of customs and culture and without medical reasons, WHO issued a new guideline stating that FGM/C is a violation against human rights.