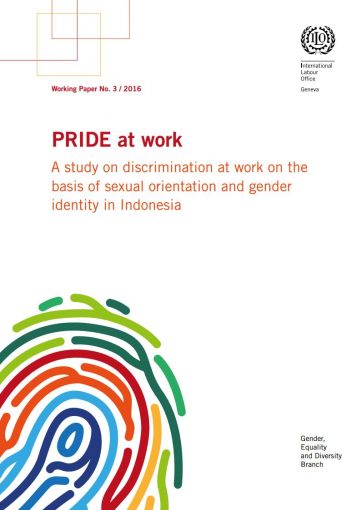 Discrimination and violence against people of diverse sexual orientation and gender identity is a serious problem around the world. Lesbian, gay, bisexual and transgender (LGBT) workers face discrimination in the labour market throughout the employment cycle because of their perceived or actual sexual orientation. They may be denied access to employment, to training and promotion, and access to social security. Since LGBT workers are unlikely to be well represented in government structures, or in employers’ and workers’ organizations, their particular interests are rarely the subject of social dialogue or reflected in collective agreements. Consequently when they encounter discrimination, harassment or bullying, the avenues for workplace dispute resolution may be scarce.

The International Labour Organization is committed to eliminating discrimination in the world of work, promoting workplace diversity and achieving decent work for all women and men, including people of diverse sexual orientation and gender identity. The right to equal treatment and opportunities is primarily a rights issue. However, promoting equality also makes good business sense, as liberating employment practices from bias allows companies to improve their talent pool and increase their access to markets.

In order to effectively deliver upon its mandate to end discrimination in the workplace in all its forms, the ILO has been undertaking country-specific studies to identify the extent and forms of discrimination faced by LGBT workers at all stages of the employment cycle. The research analyzes the legal framework to identify gaps and possibly discriminatory laws, the national social protection system, and identifies challenges as well as good practices implemented by government, employer’s and worker’s organizations. This study was prepared in the context of the ILO’s Gender Identity and Sexual Orientation: Promoting Rights, Diversity and Equality in the World of Work (PRIDE) project, with the generous financial support of the Government of Norway.

This report reflects the study’s findings and recommendations from Indonesia. While awareness about rights has grown among the LGBT community in Indonesia, public conservatism and traditional gender norms remain a barrier to LGBT person’s access to the labour market.

Indonesian law does not specifically mention sexual orientation and gender identity as prohibited grounds of discrimination. The lack of explicit prohibitions against discrimination based on sexual orientation and gender identity therefore poses a challenge for the protection of LGBT people in the workplace in Indonesia. The study also reveals that many LGBT workers choose to hide their sexual identity at work, for fear of losing their job or missing career opportunities. Often working in the informal sector and under difficult working conditions, LGBT workers are marginalised and may have difficulties accessing social protection.

We use cookies to ensure that we give you the best experience on our website. If you continue to use this site we will assume that you are happy with it.Accept