COSTING A MULTIDISCIPLINARY PACKAGE OF RESPONSE SERVICES FOR WOMEN AND GIRLS SUBJECTED TO VIOLENCE: A Gender Budgeting Approach Case Study of Indonesia 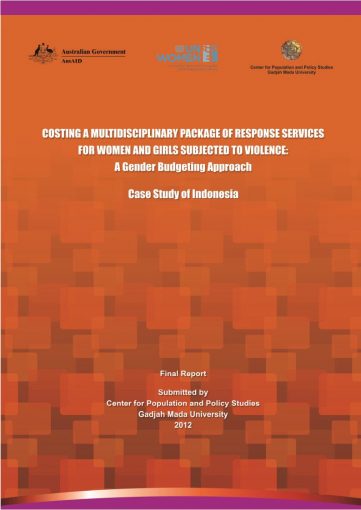 Violence against women (VAW) and girls is one of the most systemic and widespread violations of human rights worldwide. It takes place in every country, in peacetime as well as in situations of conflict and crisis, and affects women and girls regardless of age, ethnicity, or socio-economic status. It takes many forms – from domestic and sexual violence, to harmful practices, trafficking, and “honor” killings and other forms of femicide. In East and Southeast Asia, many forms of violence against women have increased in recent years, with domestic violence being one of the most common but grossly under-reported forms of violence in the region1. In Indonesia, VAW reported cases have been rising substantially over the years, where domestic violence consistently dominated the trend2.

To respond to this increasing VAW cases, many countries have developed National Action Plan (NAP) on prevention, prosecution, and provision to violence against women and girls. To support the implementation of the NAP, a number of countries in East and Southeast Asia have developed systems and mechanisms for providing a multi-disciplinary package of services for VAW survivors, through integrated service centers, one-stop crisis centers, or similar. Yet it is found that these Integrated Service Centers do not have sufficient budget, funding and capacity required for implementation3.

This study aims to inform a thorough understanding of the future administrative measures and budgetary allocations needed to implement national strategies and plans for combating violence against women and girls in Indonesia by specifically looking at the services provided through the Integrated Service Center for Women and Girls. The outcome of this study will provide beneficial inputs for the UN Women East and Southeast Asia international campaign to eliminate violence against women and girls which one of the key outcomes centers on the adoption and implementation of comprehensive NAP on VAW, including through sufficient resource allocation to translate policies and plans into transformative change on the ground.

We use cookies to ensure that we give you the best experience on our website. If you continue to use this site we will assume that you are happy with it.Accept