The Center for Population and Policy Studies of Universitas Gadjah Mada (CPPS UGM) is a research institute dedicated to the development of knowledge and social prosperity. One of the oldest population research centers in Indonesia, CPPS UGM has shown its capabilities and maintains a prominent position in academia.

CPPS UGM was established on 1 April 1973. Since then, it has conducted numerous research programs, often related to dimensions or issues of culture, politics, economics, agriculture, health, and the environment, in the field of population and policy studies. To support its various activities (including, but not limited to, training, research, institutional capacity building, and human resources development), CPPS UGM has received continuous financial support from a number of donor institutions. Universitas Gadjah Mada, as the Center’s parent institution, has likewise made important contributions to the Center’s physical facilities, administration, and institutional autonomy.

Throughout 2015, several institutions made essential contributions to the research and education programs carried out by CPPS UGM. With UN Women and the Ministry of Women’s Empowerment and Child Protection, CPPS UGM conducted a survey regarding the funding of services for the victims of violence against women and children. At the beginning of the year, CPPS UGM worked with ENI Indonesia to conduct research into land ownership and evaluate the social, economic, and geographic impact of Blok Muara Bakau in East Kalimantan. In the middle of the year, CPPS UGM conducted research with the theme “Investing in the Family’s Future: Gender Aspects of the Remittance and Youth Aspirations Regarding Migration”. For this project, CPPS UGM worked with the Asia Research Institute of the National University of Singapore.

Collaboration with the Municipal Government of Yogyakarta also continued this year through a number of programs, including measuring Yogyakarta residents’ satisfaction with municipal utilities, measuring Yogyakarta residents’ satisfaction with the municipal government’s human resource and information services, and surveying the aspirations of Yogyakarta residents. Together with the Regional Board of Development Planning of Fakfak Regency, West Papua, CPPS UGM conducted a poverty mapping program in Fakfak. CPPS UGM also worked with the National Team for Accelerating Poverty Reduction (TNP2K) to conduct a survey on household income. This last activity involved conducting research into and verifying the most recent updates to the integrated database recently completed by the Central Bureau of Statistics.

CPPS UGM would like to express its gratitude to Gadjah Mada University, its various domestic and international donor and research institutions, and all of its partners for their support in the numerous activities completed over the past year. We hope that collaboration can be continued and further developed in the coming years. It is thus our pleasure to present the CPPS UGM annual report for 2015. [] 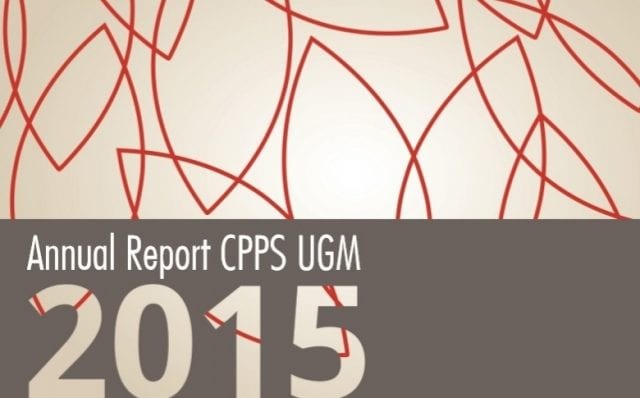